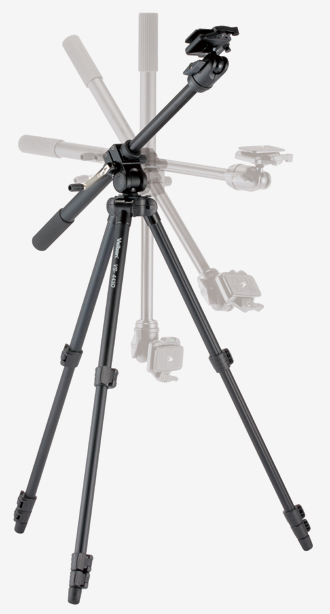 Velbon was established on March 11th 1955, so the company is now celebrating its 55th anniversary. To mark this anniversary, we have launched a tripod named the Sherpa 555R. We request that distributors promote this product.

The name Velbon comes from the words 'very' and 'bon' ('good' in French). The name sounds like the word for 'ringing a bell' in Chinese, so we use 'Golden Bell' as the brand name in China. Golden Bell is the most popular brand in the Chinese market. When we supplied products that were manufactured in Japan, we enclosed a small swinging gold bell with each unit as a symbol of the brand.

We later started to produce tripods in the US due to the big change in the exchange rate of the US dollar and Japanese yen. Many of our tripods were made in the US in the 1970s and 80s.

Velbon has sought to achieve two goals for many years. Tripods used to be very heavy and bulky. Thus, one of our goals has been to make tripods that are light in weight and are also sturdy.
We started to use plastics when our production base moved from the US to Taiwan. Plastics enabled us to make tripods that were light and less expensive, but stability could not be improved.

Then we started to use carbon fiber made in Japan and also magnesium. These were expensive materials but this allowed us to reduce the weight to one third. However, the cost was more than three times that of a similar spec tripod made of aluminum.
As regards magnesium alloy, Velbon pioneered in introducing magnesium alloy in the world tripod industry. We are proud of this achievement and this is why we call ourselves “The Tripod Innovator."

The second goal was to make tripods which were compact but have sufficient extension to be tall enough for all photographers. We remember well Herbert Keppler of 'Popular Photography.' He proposed the ideal tripod specifications: folded length of less than 48cm, which will fit inside airplane carry-on. However he wanted a maximum height of more than 150cm.
This was not a realistic extension ratio at that time. But Velbon President Ken Nakatani hit upon the unique technology that enables each leg section to have the same length. Normally the lower sections of tripods legs become progressively shorter because each section cannot reach the top part of the uppermost leg section when the leg is collapsed.

A bolt which penetrates into the hinge connecting the legs prevents the lower section from coming up to the top of the hinge. Ken Nakatani got the idea to avoid using such a bolt from looking at the design of cannons. The barrel of a cannon is hung from a pair of trunnions. Velbon adopted a trunnion design for hanging the hinge of the tripod legs, allowing the inside to be empty because it is not penetrated by the bolt.

The leg sections can therefore fit inside the hinge, which enables all of the sections to be of almost the same length. The small difference in each leg section’s length becomes a fairly large difference when the legs have four sections.

Ken finally reached the target of a tripod having a maximum height of 150cm but folding to a length of less than 48cm. This achievement is embodied in our MAXi 347GB tripod. This tripod was created in memory of Mr. Herbert Keppler.

Velbon succeeded in achivieving these large goals based on own philosophy and technology. It required very significant investment and took many years to reach this place. Velbon is always innovativing and creating better solutions to make photography more convenient and rewarding for both professional and amateur photographers.

Actually, Velbon now uses French-made carbon tubes to make our legs the shape that we want. Carbon tube is designed with juts inside the pipes so that each leg cannot rotate freely as it is being built.
Legs are fixed at a certain point, which enables us to make tripod locking system using a socket and lever design instead of a nut locking system. If legs can rotate freely, the leg locking socket and lever could move to any position on the pipe, which would make the tripod inconvenient to use.

Normally professional users like to lock with nuts since the degree of locking can be varied as necessary. Amateur users usually choose the lever locking system since it is fast and easy to extend. Only Velbon offers both locking system on carbon tripods.

In order to make carbon tubes of the required shape, the dimensions of the tube must be precise. To reach such high dimensional standards, we rely on technology from France, which is widely used in the car industry, such as in Formula 1, and the aircraft industry, where it is used in the Airbus A380.

Velbon has been working with such advanced companies in the tripod industry for more than 15 years. This is a measure of our pride in the brand.